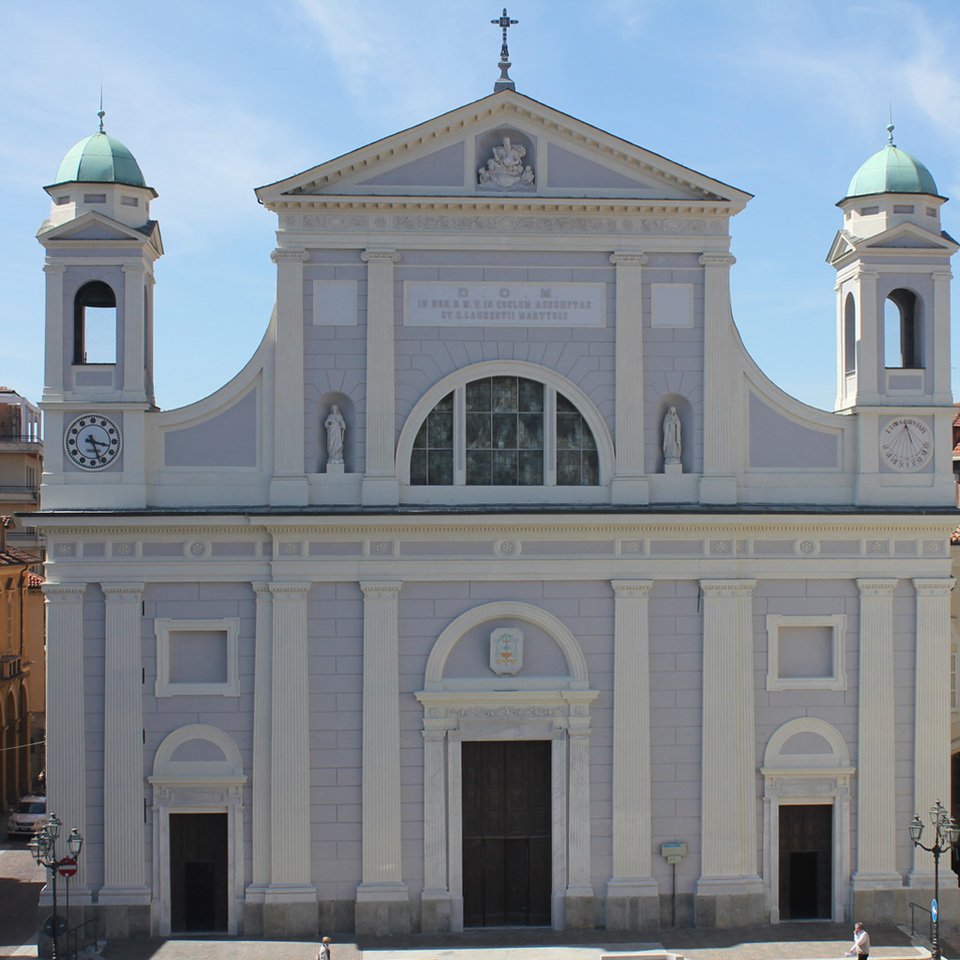 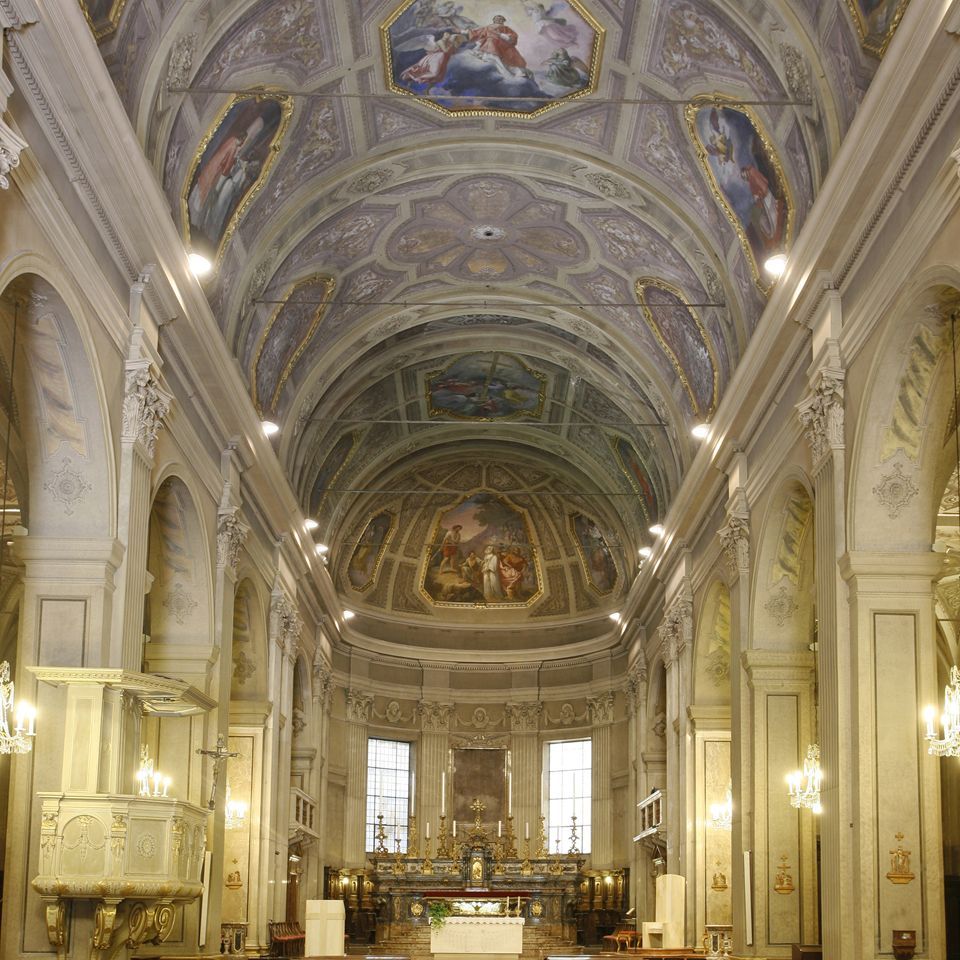 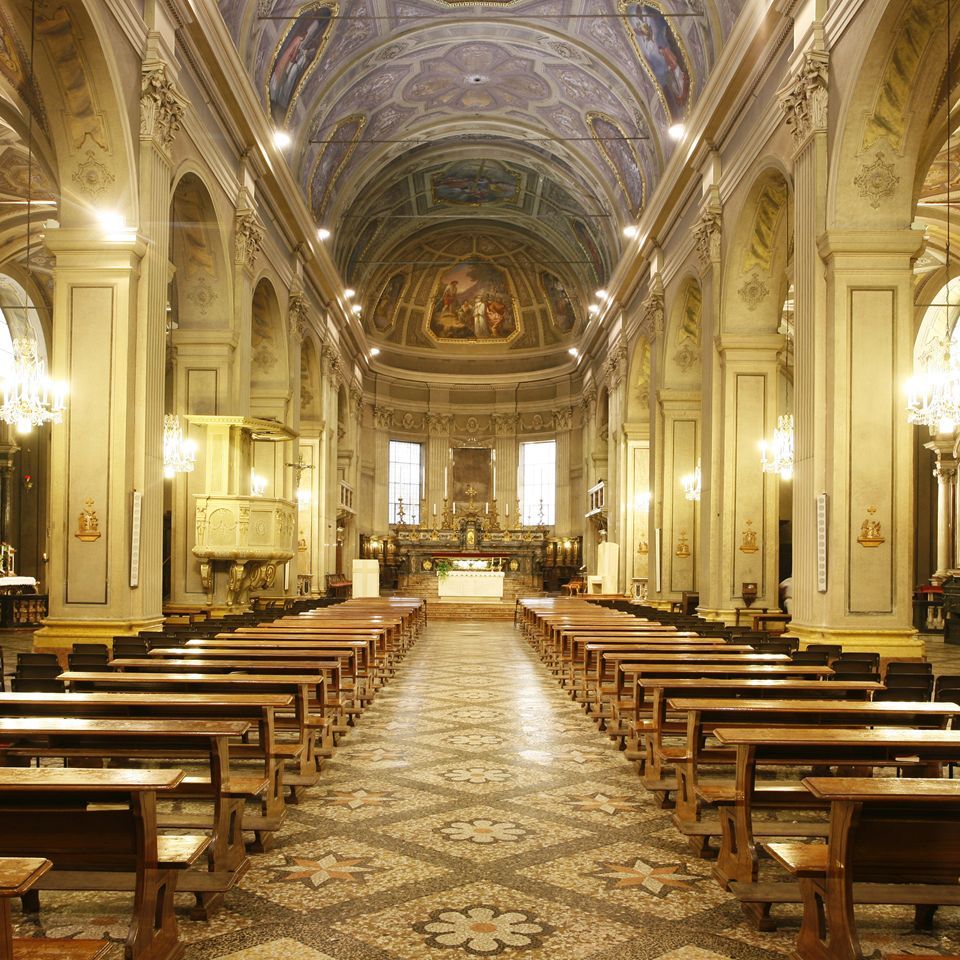 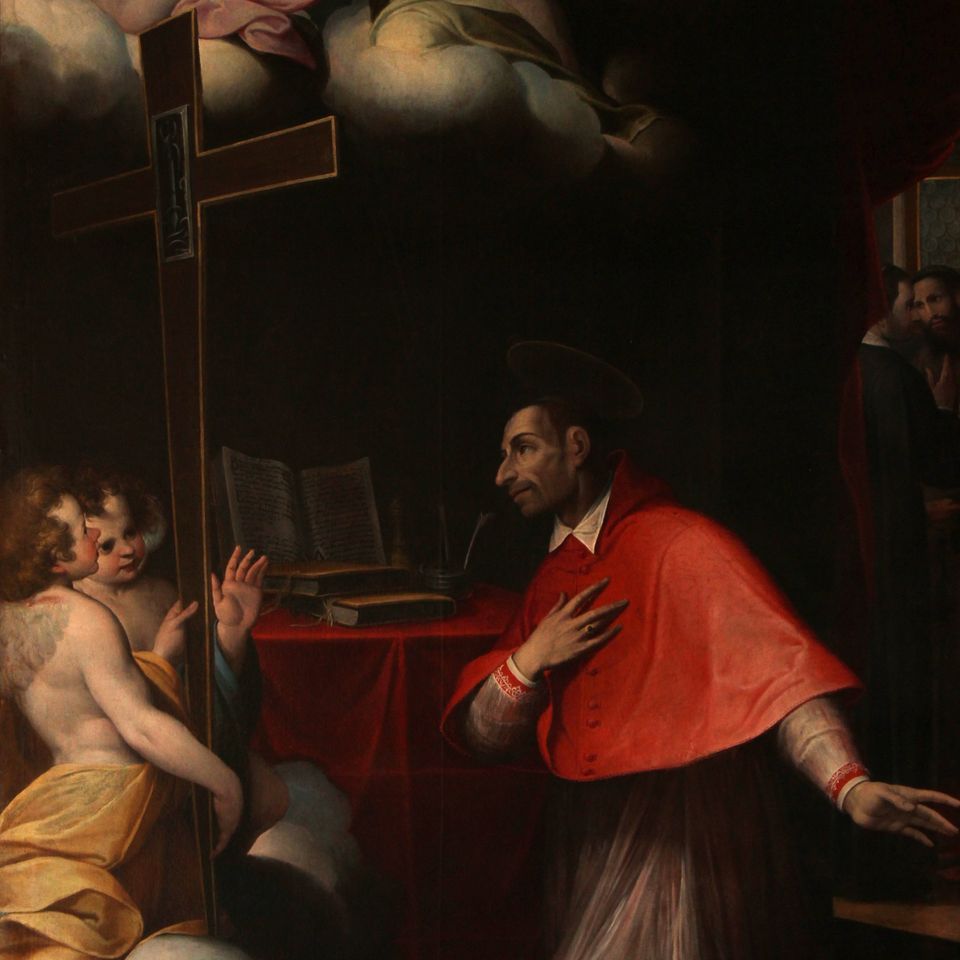 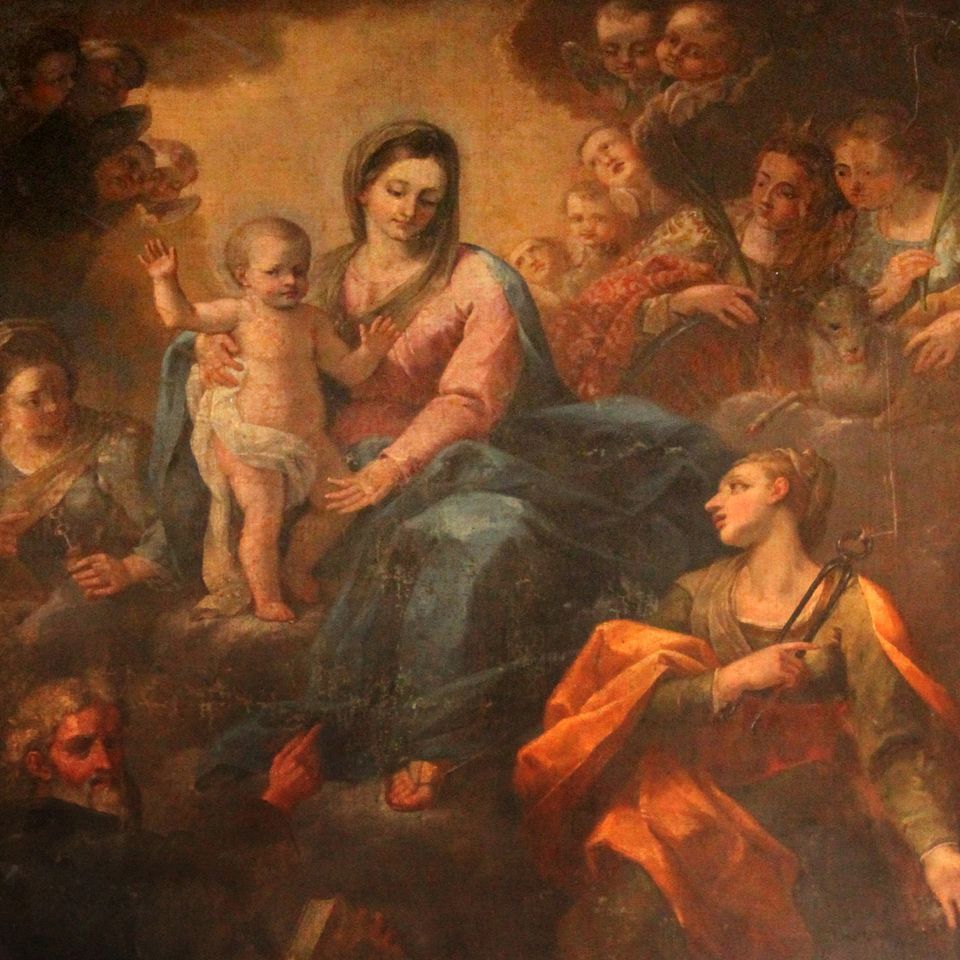 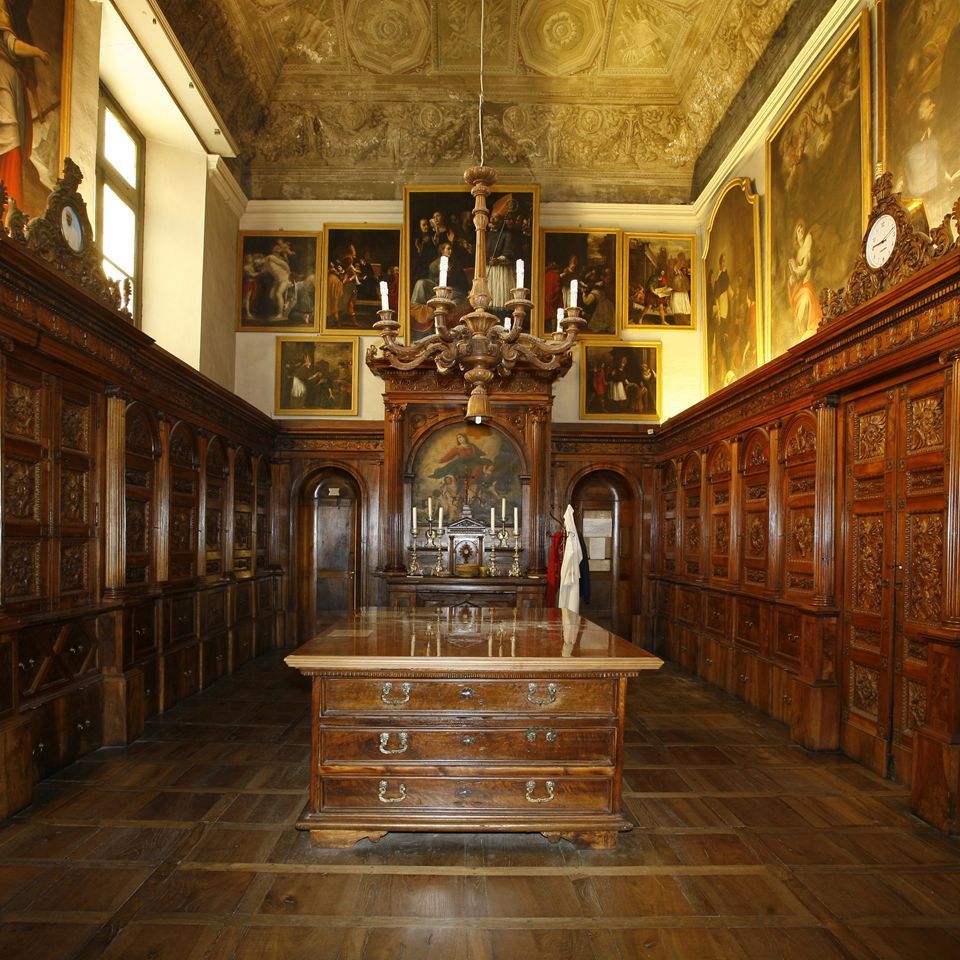 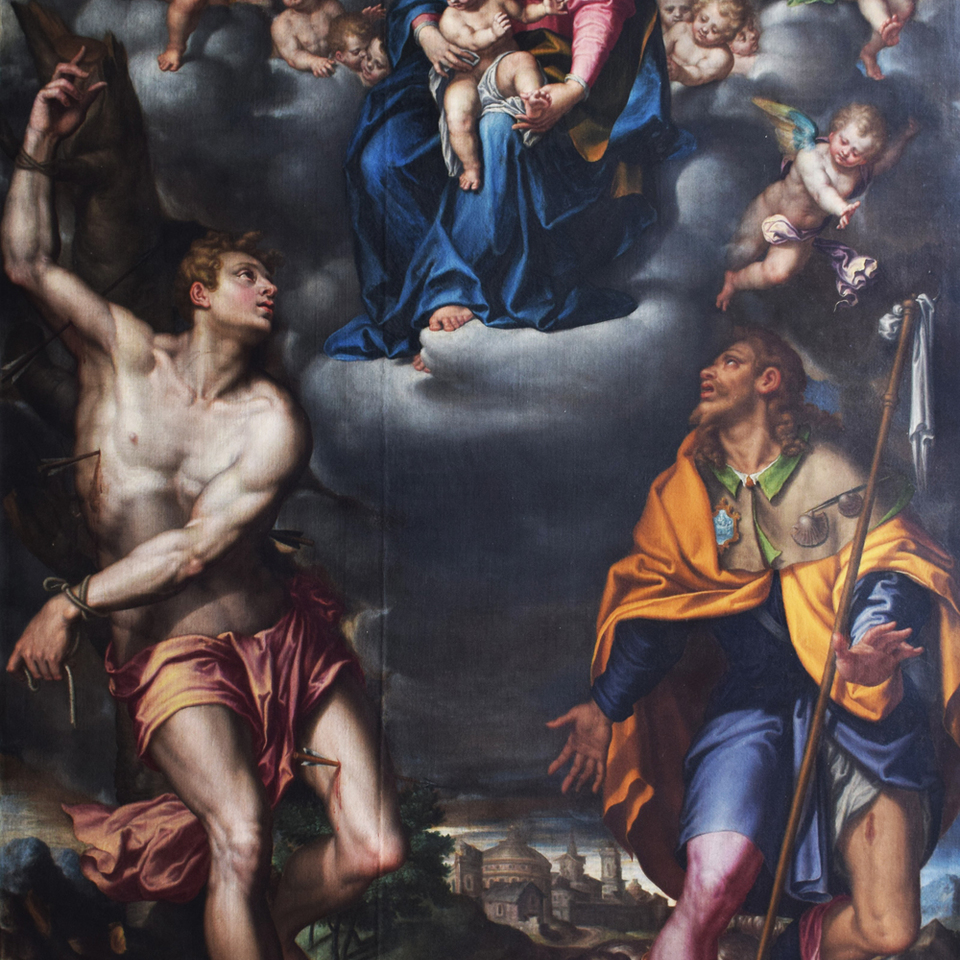 Tortona Cathedral is dedicated to Our Lady of the Assumption and Saint Lawrence. The foundation stone was laid in 1574 by Tortona’s Cardinal Gian Paolo. In 1583 it was solemnly consecrated by Bishop Cesare Gambara, in the presence of the Lady of Tortona, Christina of Denmark. In the first half of the 17th century, building work ceased until Monsignor Carlo Settala became bishop, adding the arcade gallery called the “passetto” to connect the Bishop’s Palace to the cathedral in 1661. In the second half of the 19th century the façade was rebuilt to a design by the engineer Nicolò Bruno and in addition to being plastered, it was crowned with a Neoclassical-style pediment and surmounted by sculptures of God the Father in the centre, and the Sacred Heart of Jesus and the Virgin Mary in the two side niches. The cathedral has a nave and two aisles separated by two rows of cruciform piers. The nave has a barrel vault with soffits; the aisles have small cross vaults. The side altars are set against the walls in each span. The sacristy is at the end of the left aisle and the belfry at the end of the right. The fairly long chancel is raised above the level of the nave by four steps. The historic, 18th-century high altar is in marble and houses an urn with the relics of Saint Martianus, patron saint of the diocese and traditionally the first bishop of Tortona, martyred in AD 122. The altars of the right aisle, with inlaid marble, can be dated to the 17th century and come from the Genoese church of Santi Giacomo e Filippo. The marble staircase leading to the Bishop's Palace is set against the wall of the first span, and the banisters were made in 1937–40 using balusters from the disused 18th-century balustrade of the senatorial chancel.

Prayer and worship
The high altar is from Pavia’s Dominican convent of San Tommaso, offered to the canons of Tortona cathedral in the later 18th century when the Dominicans were forced to leave their home following the policies of suppression of religious orders being pursued. On 29 January 1786, the building was consecrated by Bishop Carlo Maurizio Pejretti, and since the purchase had been possible thanks to the bequest of his predecessor, Monsignor Andujar, the cathedral chapter decided to perpetuate the memory of the deceased prelate on the same commemorative stone. To the left of the altar, a gilded metal relief of the episcopal coat of arms was also added, while on the right there was a depiction of the gridiron, symbol of the martyrdom of Saint Lawrence, patron saint of the church together with Our Lady of the Assumption. The antependium was altered in about 1872, on the occasion of the celebrations for the 1,800th anniversary of Marcianus’ arrival in Tortona, when Bishop Capelli commissioned an urn to hold the relics of the patron saint. On the feast day of Saint Marcianus (6 March) the urn was placed at the centre of the nave and displayed for worship.
In the right aisle, the altar in the fifth bay houses the reliquary of the Holy Cross, a great processional cross commissioned by Monsignor Carlo Settala, Bishop of Tortona from 1653 to 1682. The cross is one and a half metres in height and is still carried during processions on the evening of Good Friday and on the feast of the Holy Cross, the second Monday in May, when Tortona celebrates its patron with great veneration and participation by the population. Under the same altar there is a 17th-century reliquary holding the Holy Swaddling of the Blessed Virgin, with which Mary is said to have carried the newly-born Jesus during the flight to Egypt. 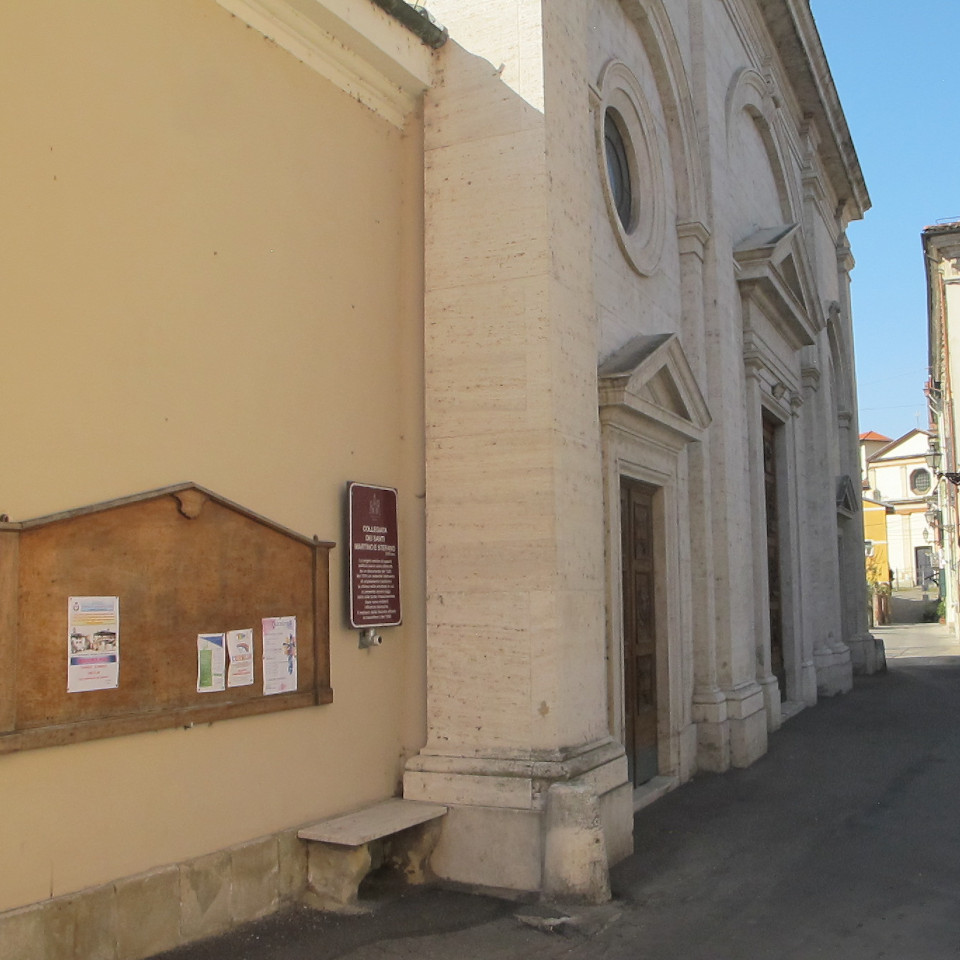 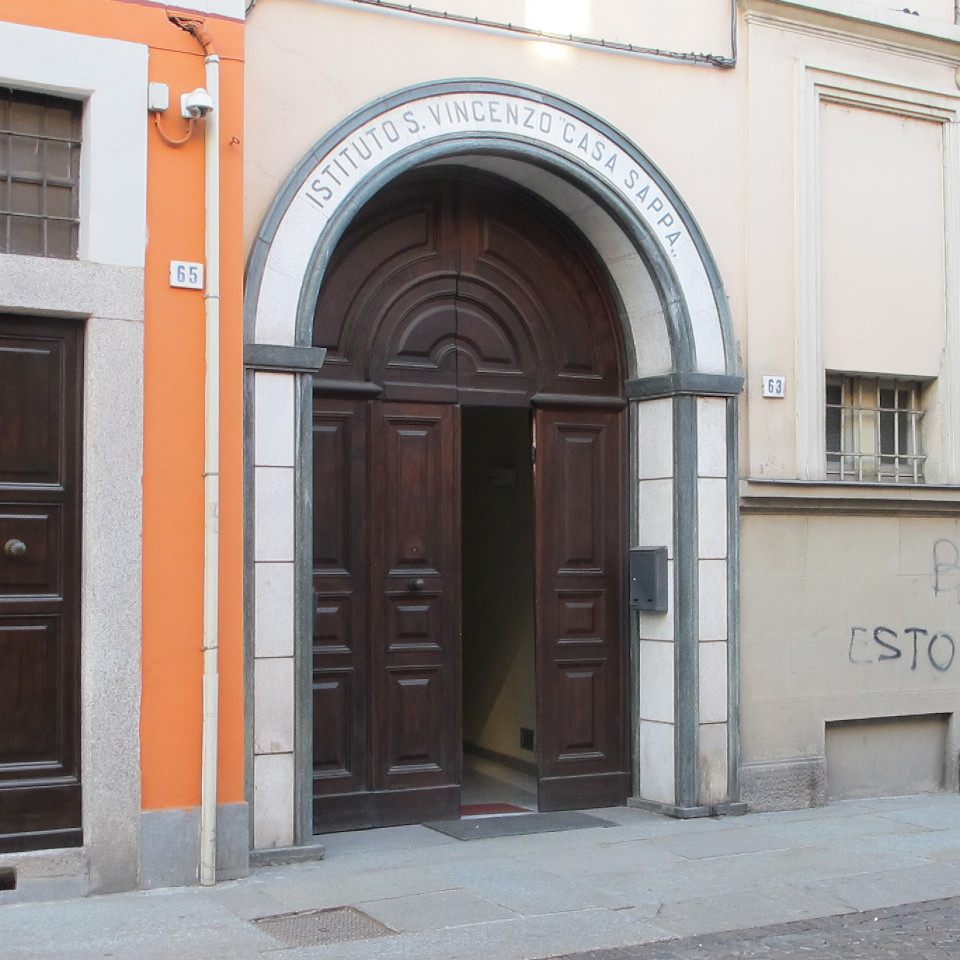 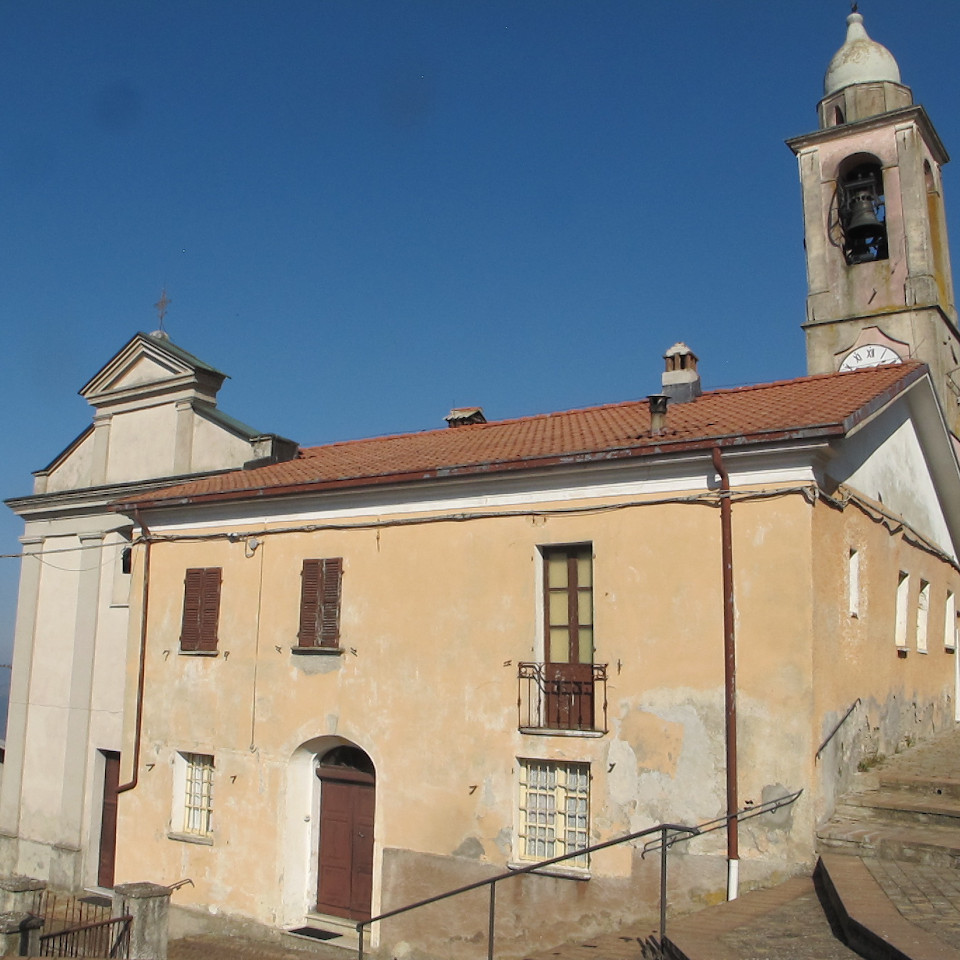