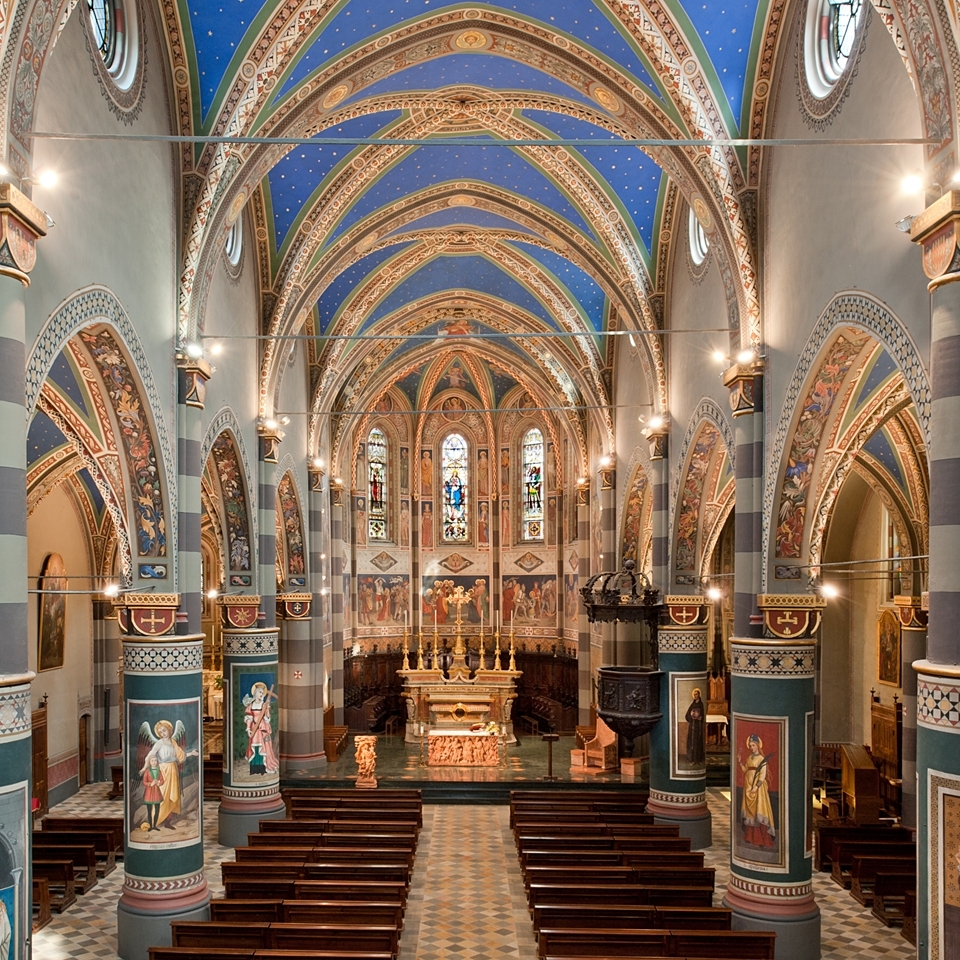 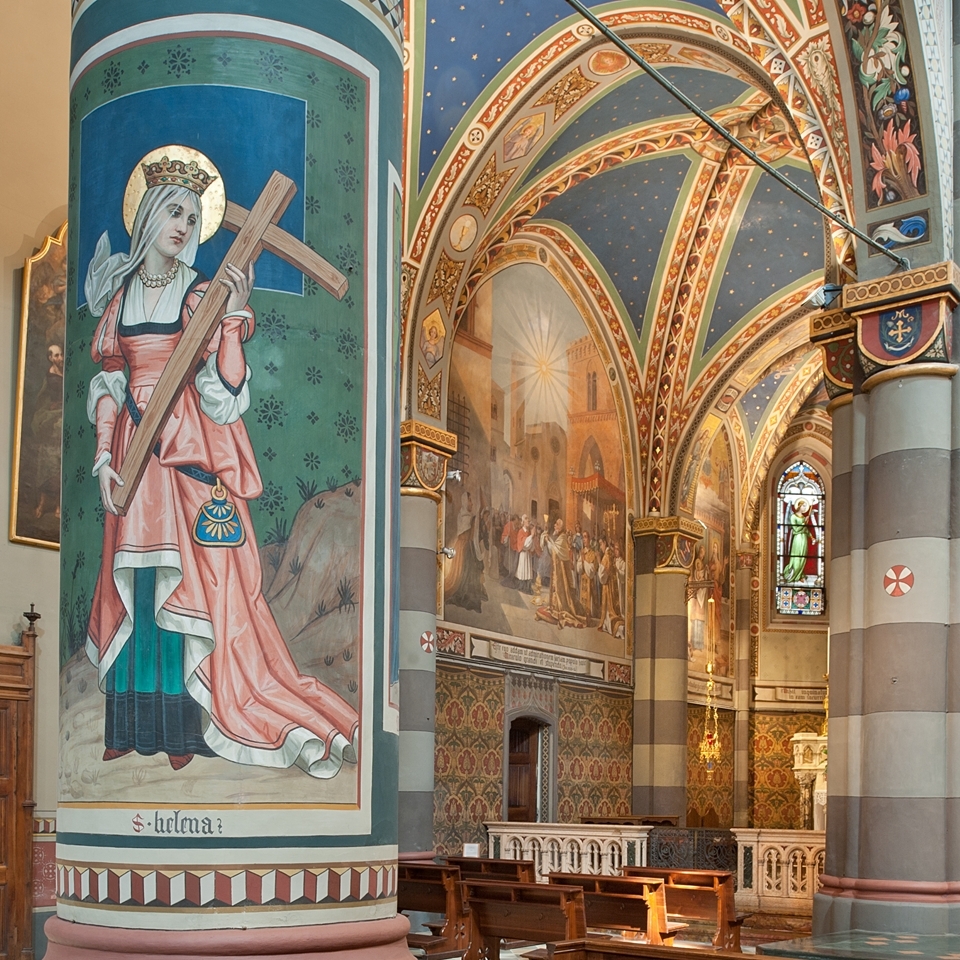 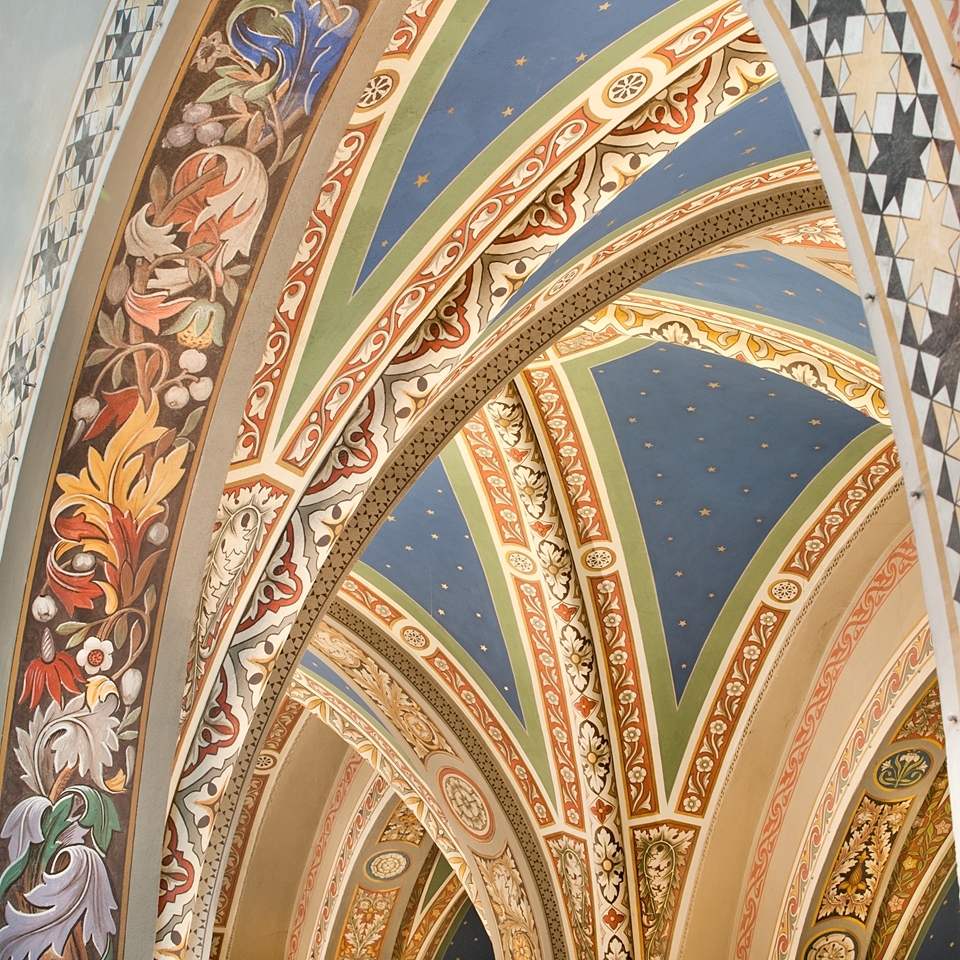 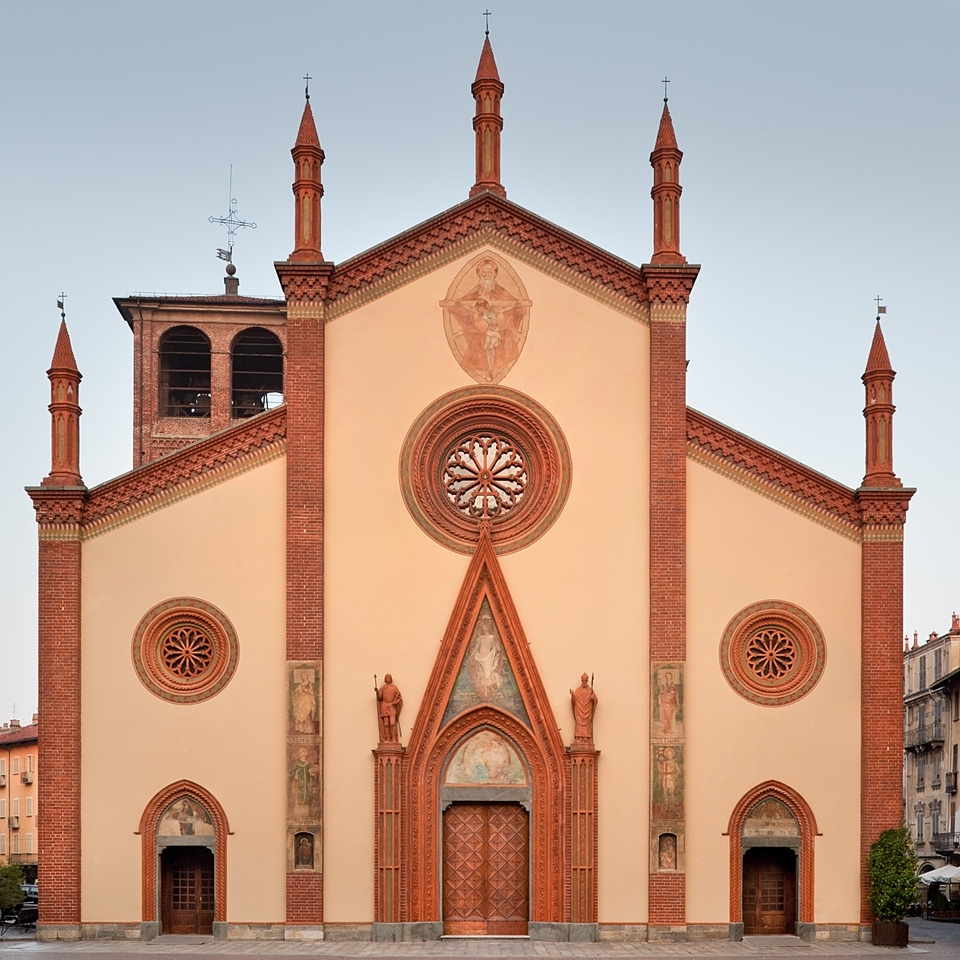 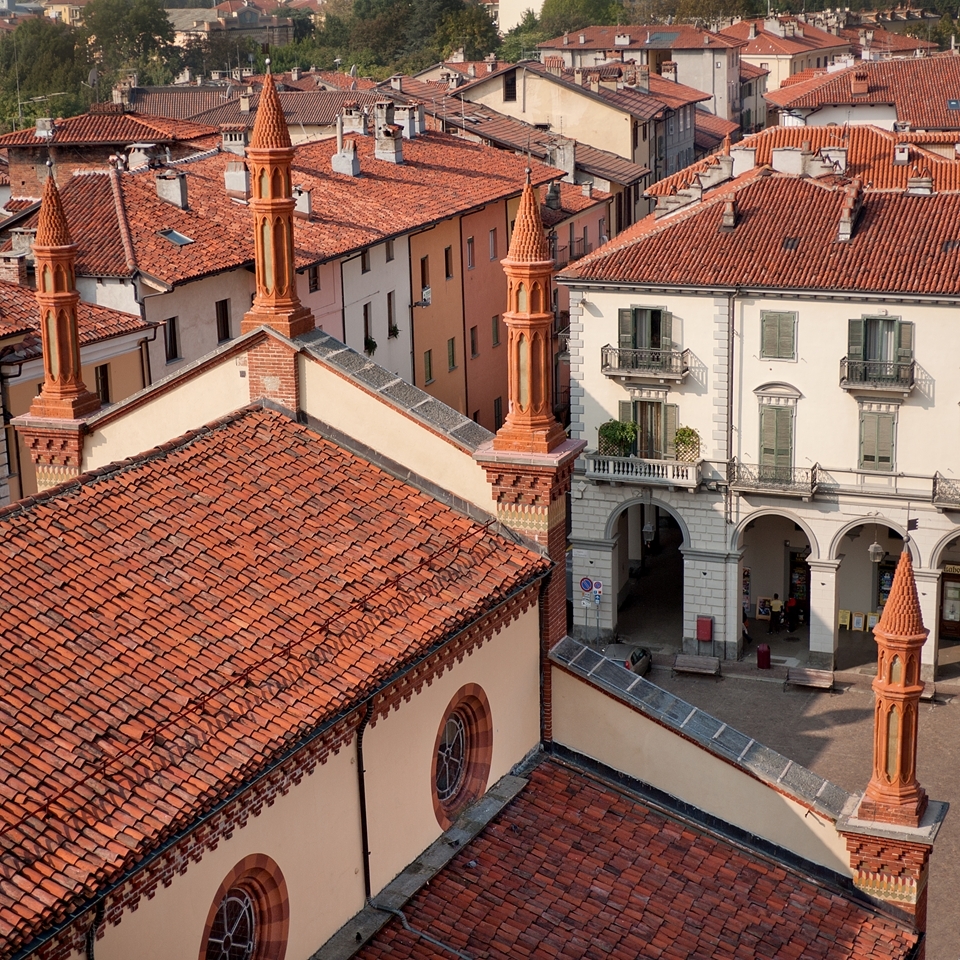 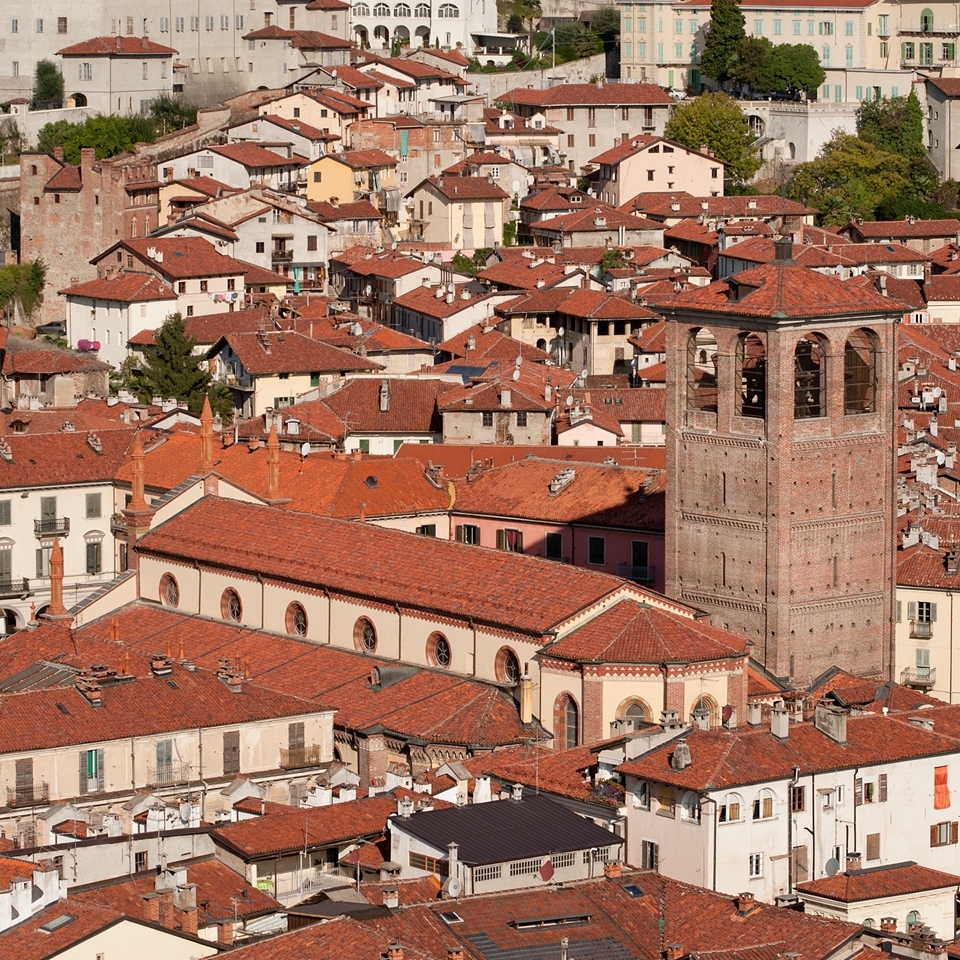 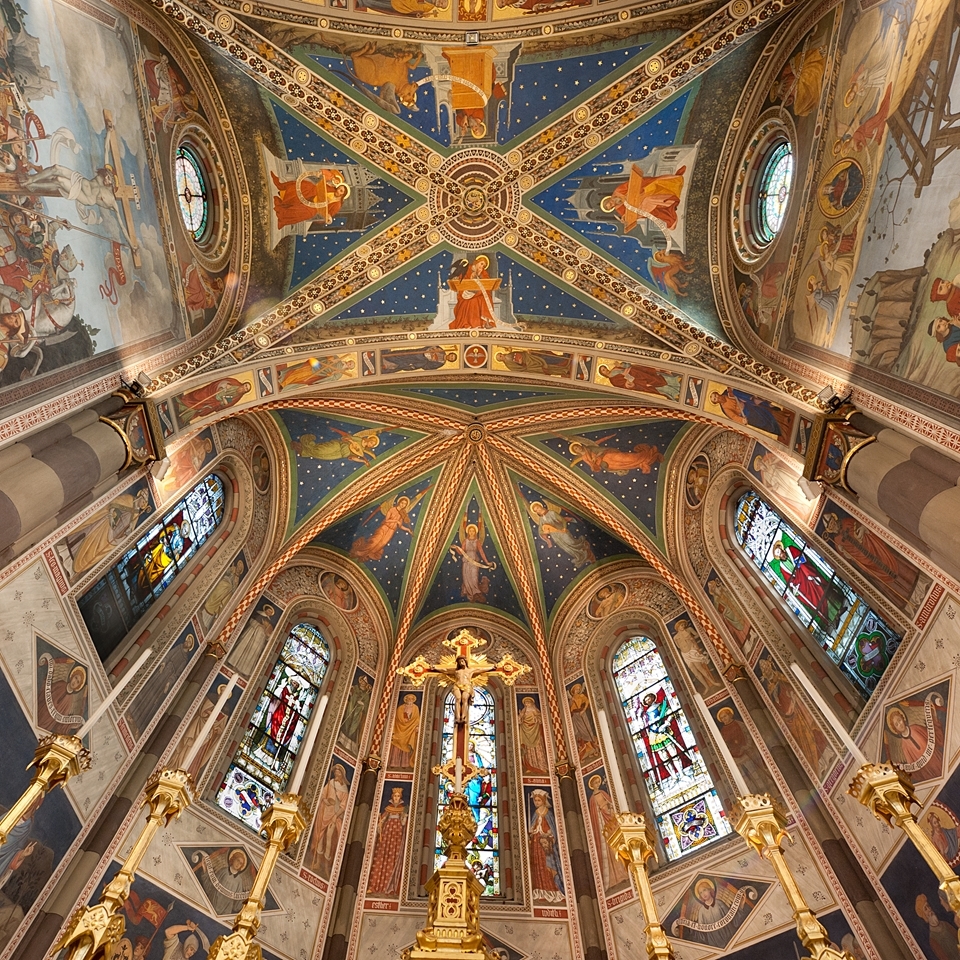 The institution of a college of canons in Pinerolo established by Landolfo, Bishop of Turin, dating back to 1024 suggests the presence of a church. The cathedral is nevertheless mentioned for the first time on March 14th, 1044 when Marquis Enrico of Monferrato and Countess Adelaide gave three manses located in Pinerolo to the church of San Donato. On October 26th, 1078 Countess Adelaide herself and her sister, Agnese, gave the collegiate churches of San Maurizio and San Donato to the Monastery of Abbadia with the praise and the approval of Cuniberto, Bishop of Turin, who was also the canon of both churches.

The original building, which, at that time, already had a nave and two aisles, probably in Lombard-Romanesque style, was restored in Gothic style possibly thanks to the powerful guild of wool merchants at the beginning of the XV Century. Documentary evidence shows that a portico set against the church façade had existed since 1371 and that it was used for drawing up public deeds. At the end of the XV Century the structure was dismantled to build a new span of the church. A new façade was built, smoothed on the north side to prevent it from touching the closed arcades of the square. A rectory and the canons’ houses had probably existed on that side since 1349 as well as a cloister set against them since 1391, but everything was demolished within the beginning of the XVII Century to allow space to the new wide Rosary Chapel and to an extension of the cemetery – the latter had already been mentioned since 1192 – taking up a wide area of the square near the bell tower. The construction of the bell tower started in 1420 and in 1543 a crenellated crowning was added. Finally, the old sacristy, which was already on the south side of the apse in 1456, was rebuilt around 1509 by the Canon Baldassarre Bernezzo, whose anthropomorphic grave can still be seen in the nearby Chapel of the Magi.

In 1748, with the setting up of the Diocese of Pinerolo, the abbey church of the Monastery of Abbadia lost its title of cathedral, which was given to the college church of San Donato. In the years from 1766 to 1778 imposing restoration works occurred in Baroque style, thanks to the first bishop, Monsignor D’Orlié de Saint Innocent, who gave the church a visible cut with the past. By adhering to the Baroque style, the columns were squared and the vaults of the nave and aisles were lowered. In 1781 the high marble altar, designed by Gerolamo Buniva, was reshaped and two coats of arms of the Savoy family were added, in order to show the important contribution of King Vittorio Amedeo III. In 1763 the Town Council equipped the bell tower with eight lancet windows, in order to make it higher. It was outside the church, near the cemetery which would be in the square until about 1826. At the same time the nearby sacristy, which had been damaged during the bombing of 1693, was rebuilt and widened between 1712 and 1713 by Canon Gioan Domenico Belli.

The church, which had already suffered the earthquake of 1808, was completely restored at the end of the century, following the architectural tastes of the age, which aimed at recovering the original Gothic structure of the building with large works. In 1885 Melchiorre Pulciano started working at a new façade of the Cathedral and, after adding new terracotta elements similar to the decorations of the medieval buildings of the town, threatened to resign owing to the disagreement with the Bishop about the latter’s freedom in introducing novelties into the original structure of the church, so changing it radically. However, he would not give up the restoration works, even though he slowed them down on the north side, where three chapels and the side entrance were built, after a suffered compromise. The engineer Stefano Cambiano from Pinerolo, who worked more rapidly and complying with the Bishop’s intentions, carried out the chapels on the south side and the whole apse area between 1902 and 1905. A new chapter house was built there in the place of the old sacristy and a new sacristy was erected in the north-east corner of the church, almost under the bell tower.

During the removal activities of the internal Baroque superstructure, it was not possible to recover the medieval pictorial decorations therefore the church was completely redecorated.

The pictorial decorations of the interior of the church, showing stories of the Old and New Testament and images of saints on each column, were commissioned to the painters Giuseppe Rollini and Alessandro Vacca during the episcopate of Monsignor Chiesa. Rollini and Vacca actively worked at the Medieval Borgo of Turin and carried them out between 1887 and 1892. Inside the church there are also paintings by Enrico Reffo and Edoardo Calosso.

It is particularly important to point out the presence of a fragment of a XV Century fresco depicting the Blessed Peter of Luxembourg, which is still visible on the first column of the right aisle.

The chorus stalls of the cathedral are adorned with a series of wooden works dating back to 1689 representing lilies of France and enriched by a lectern with a biceps eagle and dolphins, a gift of Canon Belli in 1690.

The arrangement of the cathedral presbytery area started in the 1960s during the episcopate of Monsignor Santo Quadri. Initially a temporary modification was made to the altar facing the people and to the pulpit, using some of the wooden parts of the resized episcopal chair dating back to the years of Bishop Rossi’s episcopate. During this intervention the marble balustrade and the canopy suspended above the vault of the high altar were eliminated.

The decision that led to the current arrangement of the presbytery area dates back to 1999 and it was taken by Bishop Piergiorgio Debernardi. The study of the presbytery area was entrusted to the architect Antonio Vincenti from Milan and the three sculptural elements – altar, pulpit and episcopal chair – were designed by Mario Rudelli. The above mentioned works were carried out in 2001 using Asiago pink marble. In the iconographic catechesis they represent the “Sacrifices of Abel, Abraham and Melchisedech” carved in the altar; “Christ, the Good Shepherd” and “the Mission of the Apostles” carved in the episcopal chair; “the Angel of the Resurrection” carved in the pulpit.

The organ placed on the counterfaced wooden tribune was manufactured by the Vegezzi-Bossi company in 1919, by recovering some parts of the previous organ made by the Collino family. In 2006 a positive organ was placed in the right aisle. It comes from the Collegno Castle and is used in the Cathedral thanks to a contract of loan drawn up with the Guidobono Cavalchini family. The instrument, dating back to the first half of the XVIII century, is a work by an anonymous author, although it has been attributed to Giuseppe Calandra.

The crypt of the bishops was built in 1963 and located under the floor in front of the Chapel of the Magi and is visible through a crystal plate.

The patronal feast of San Donato, Bishop of Arezzo and martyr, is celebrated in the Cathedral on the last Sunday of August. 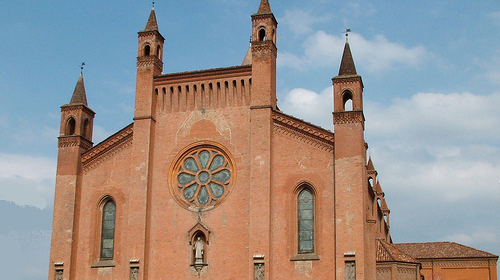 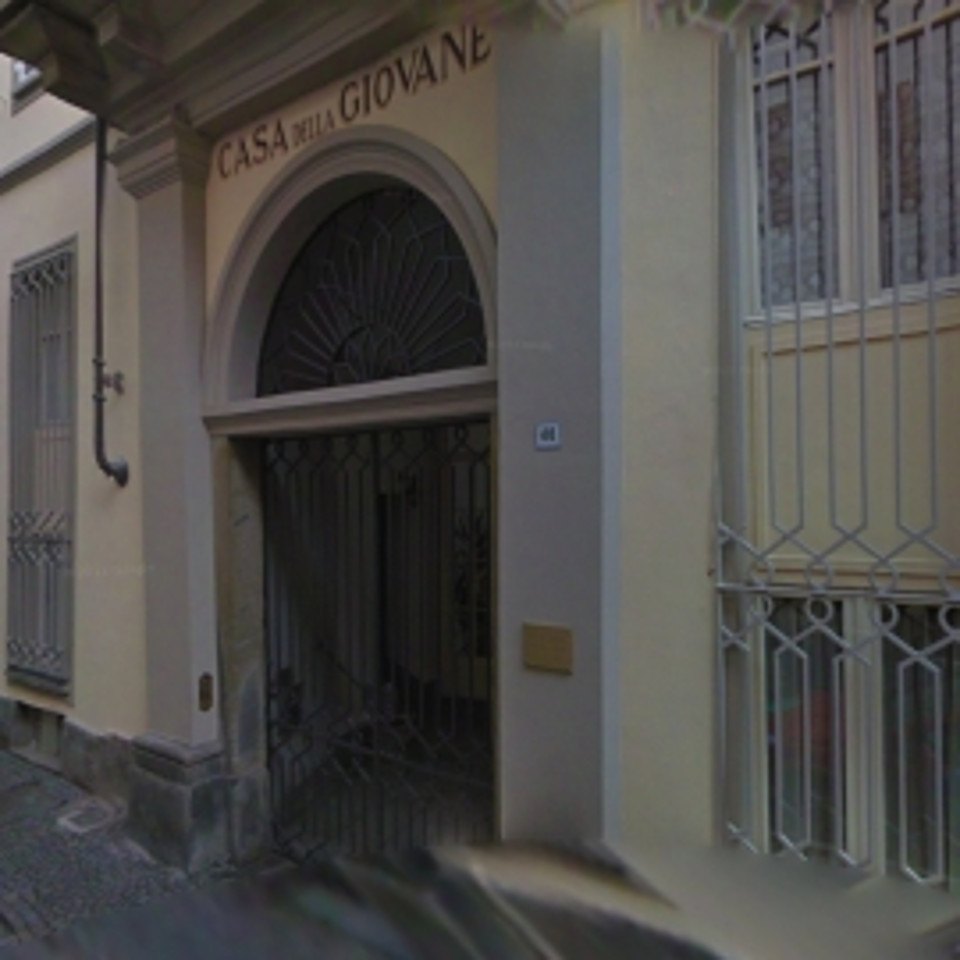 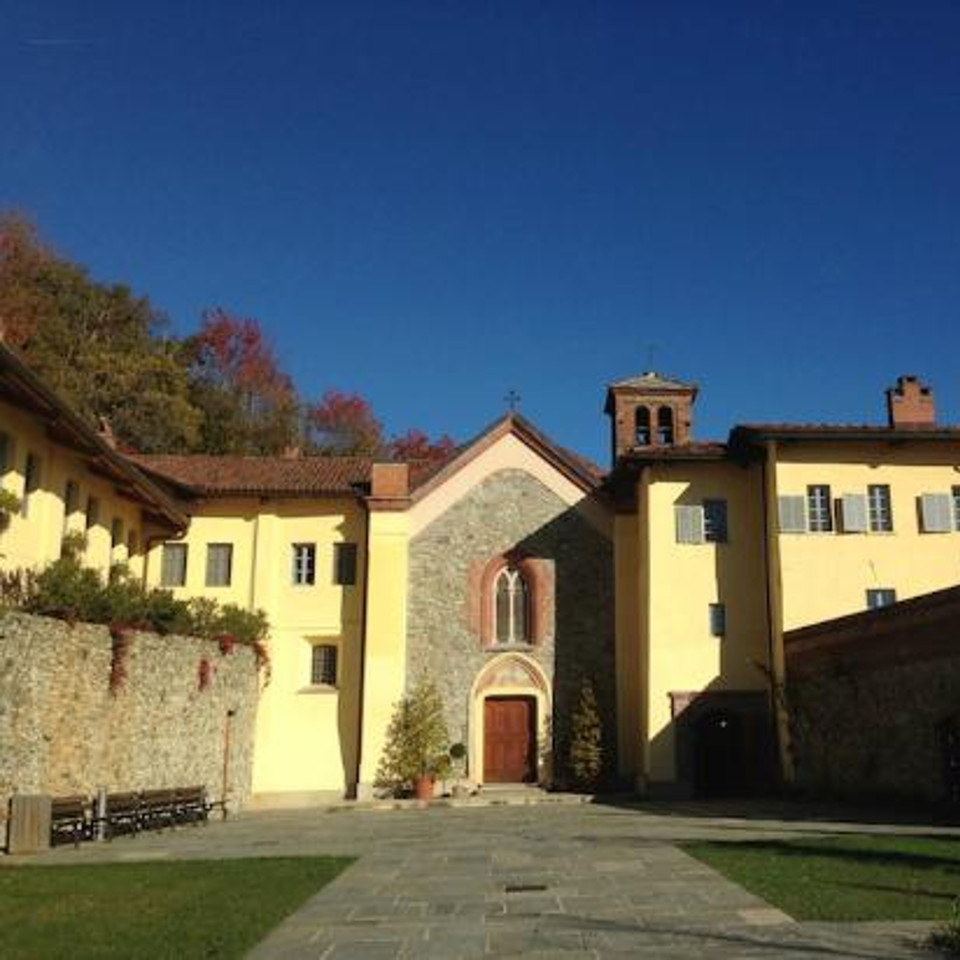 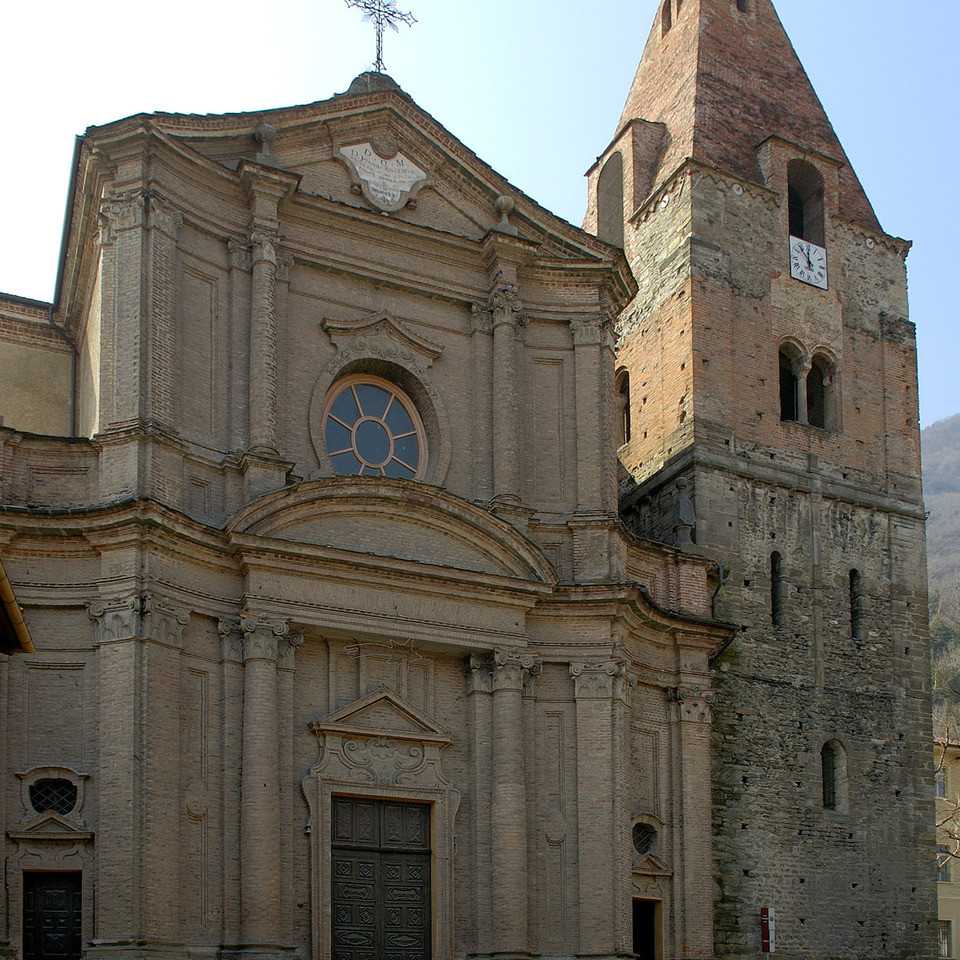